[THE INVESTOR] Heather Cho, the former Korean Air vice president and protagonist of the notorious “nut rage” fiasco a few years back recently made an appearance at the torch relay for the 2018 PyeongChang Olympics when the flame arrived in Seoul on Jan. 13.

She was one of the supporting runners for the city’s first torchbearer Cho Yang-ho, the Hanjin Group chairman who played a vital role in getting Korea to host the Winter Olympics for the first time.

But watching her run at the globally live-streamed event, many Koreans were questioning if she deserves to be a part of the program.

The 44-year-old is the eldest daughter of the Hanjin patriarch who made global headlines in 2014 when she delayed a Seoul-bound Korean Air flight in New York over a bag of macadamia nuts. Korean Air, owned by Hanjin, is Korea’s largest flag carrier.

Cho was in charge of the airliner’s in-flight service, and she literally went “nuts” at a flight attendant for not serving her nuts on a plate in the first-class section. She then ordered the aircraft to return to the boarding gate to deplane the chief steward.

In fact, people still remember how the chairman made a deep bow of apology a week later in response to the raging public anger. He called out his daughter, saying she had been foolish, and that he regretted not having raised her better.

There is no law saying the Hanjin heiress cannot join the torch relay. She is a free citizen, and if the organizing committee says she can, she can.

In fact, almost anyone can carry a torch or become the supporting runner if he or she is at least 14 years old and is able to run for about 200 meters. The only informal criteria for the Olympic sponsors and organizers in choosing torchbearers is that they are mostly former Olympic athletes, celebrities or ordinary citizens who have had the most impact. 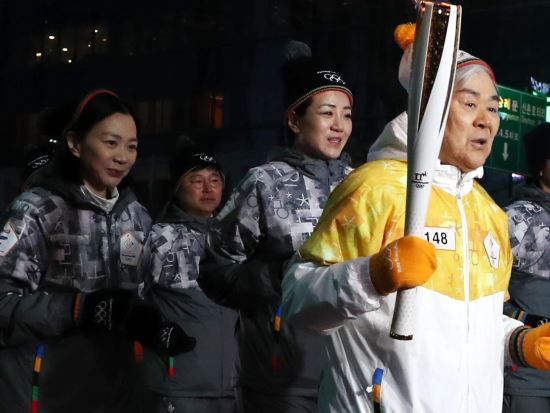 Hanjin Group Chairman Cho Yang-ho carries the Olympic torch along with his two daughters -- Cho Hyun-ah, more widely known as Heather Cho (left) and Hyun-min -- during the torch relay in Seoul on Jan. 13.

As for the Hanjin chairman, he was chosen because Korean Air is one of the official sponsors of the upcoming Olympics, having paid more than 50 billion won (US$47 million).

Carrying the Olympic torch is a symbolic act, and it’s a coveted personal honor to be representing Korea during one of the world’s oldest and most-watched sports events. That’s why tens of thousands of people applied to become one of the 7,200 torchbearers, or a supporting runner.

But in my view, the Hanjin family reduced the special and joyful event to a family gathering. Cho had reportedly told his friends and family that he wished to run with his three children, including Heather. Perhaps it was his present to his depressed daughter who might still be fretting over her lost dignity.

For the rest of Korea, including myself, we were left to wonder whom this event was for.

My conclusion is that the biggest victim of all this is Korean Air. By having Heather in the relay, it only ended up shining the spotlight once again on a disgraceful event that tarnished the reputation of the globally renowned carrier.